Current Status of the Vegetation in Historic Karuk Cultural Use Sites 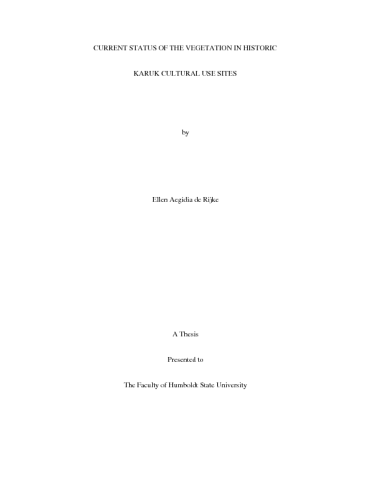 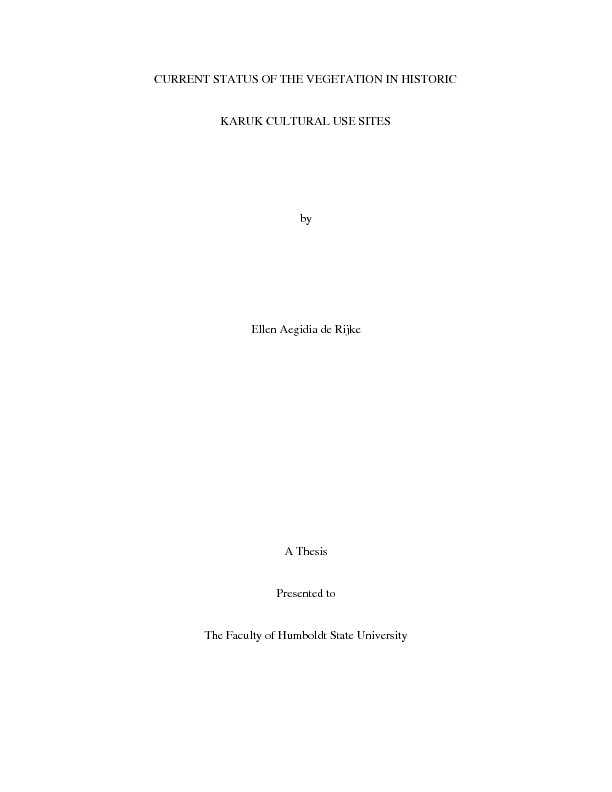 The Karuk Indians currently inhabit some half a million hectares of ancestral homeland in northern California and have done so for an unknown number of generations. Largely through the use of frequent, low intensity burns, the Karuk created, to some degree, the vegetation pattern encountered by Euro-Americans in the 1850's. Since this time, Forest Service land management has been based on the philosophy that the elimination of fire is fundamental to preserving natural environments. I selected five historic Karuk cultural use sites to investigate the nature of change in the forest and the associated meadow as a result of fire suppression. I used digital orthoquadrangle maps to stratify the forest into tiers of plots with purposeful bias to capture potential change in stand structure and composition as distance from the meadow increased. I sampled these forests to determine structure (tree basal area and density) and composition (canopy, undestory, regeneration, shrub, and herbaceous species), Douglas-fir seedling density, and Douglas-fir age. In addition, I censused the associated meadow for composition and relative abundance.Each use site is distinctive with general pattern found across them. Douglas-fir shared importance with madrone or tanoak. The Douglas-fir ages at Oak Bottom, Grasshopper Flat, Ishi Pishi, and Eyese Bar suggest that establishment has occurred after contact with Euro-Americans. The Douglas-fir ages and forest structure of the Persido Bar site are those of an old-growth stand. The pattern of Douglas-fir ages appears to show that Douglas-fir is moving towards the meadows where hardwoods are prominent and shade requirements are optimal.The meadows support a large number of native non-use plant species though the abundance of these species is not as high as exotic weeds. The number of Karuk use plants is low. Several use plants with appropriate habitat requirements are not found.These patterns support the hypothesis that Douglas-fir is invading forests and meadow habitats. The shade effects and cover changes of this invasion are negatively impacting the populations of plants used by the Karuk.Provenance: Contributed to Sipnuuk Food Security Collection by Sibyl Diver, phD Candidate at UC Berkeley, in association with her dissertation research (especially materials pertaining to Traditional Ecological Knowledge, co-management, eco-cultural restoration, and Ti Creek) as well as her research for the Karuk Historical Land Management Timeline that was a project of the Karuk-Berkeley Collaborative.Rights: Ellen deRijke