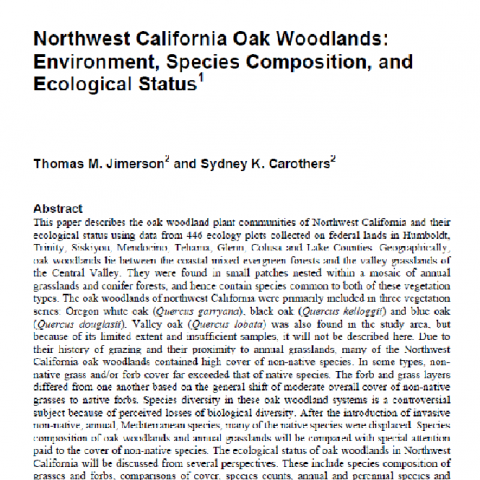 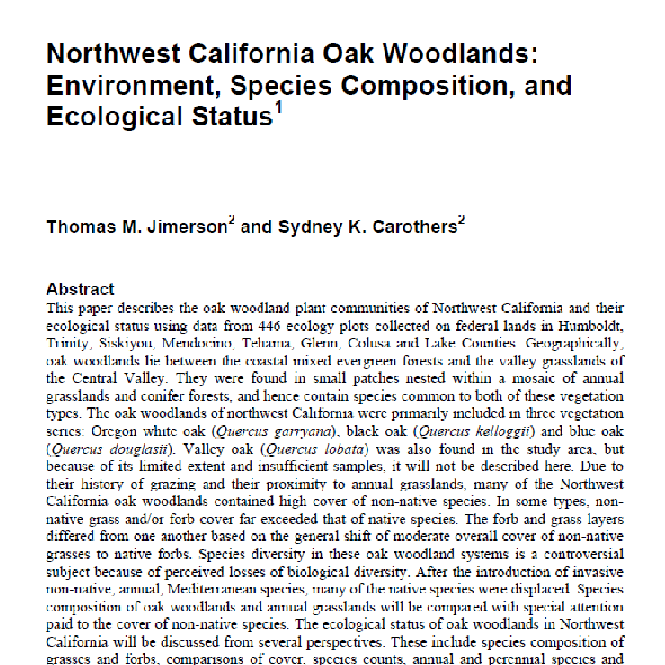 This paper describes the oak woodland plant communities of Northwest California and their ecological status using data from 446 ecology plots collected on federal lands in Humboldt, Trinity, Siskiyou, Mendocino, Tehama, Glenn, Colusa and Lake Counties. Geographically, oak woodlands lie between the coastal mixed evergreen forests and the valley grasslands of the Central Valley. They were found in small patches nested within a mosaic of annual grasslands and conifer forests, and hence contain species common to both of these vegetation types. The oak woodlands of northwest California were primarily included in three vegetation series: Oregon white oak (Quercus garryana), black oak (Quercus kelloggii) and blue oak (Quercus douglasii). Valley oak (Quercus lobata) was also found in the study area, but because of its limited extent and insufficient samples, it will not be described here. Due to their history of grazing and their proximity to annual grasslands, many of the Northwest California oak woodlands contained high cover of non-native species. In some types, non-native grass and/or forb cover far exceeded that of native species. The forb and grass layers differed from one another based on the general shift of moderate overall cover of non-native grasses to native forbs. Species diversity in these oak woodland systems is a controversial subject because of perceived losses of biological diversity. After the introduction of invasive non-native, annual, Mediterranean species, many of the native species were displaced. Species composition of oak woodlands and annual grasslands will be compared with special attention paid to the cover of non-native species. The ecological status of oak woodlands in Northwest California will be discussed from several perspectives. These include species composition of grasses and forbs, comparisons of cover, species counts, annual and perennial species and native and non-native species. The long-term successional status of these systems will be described using assigned seral species status. Noxious and invasive weeds found in these oak woodlands will also be described and compared to annual grasslands.Provenance: Contributed to Sipnuuk Food Security Collection by Arielle Halpern, doctoral student in the Department of Integrative Biology at UC Berkeley, in association with research for her dissertation-in-progress: Effects of Prescribed Fire on Tanoak Associated Plant Assemblages and Karuk Cultural Use Species.