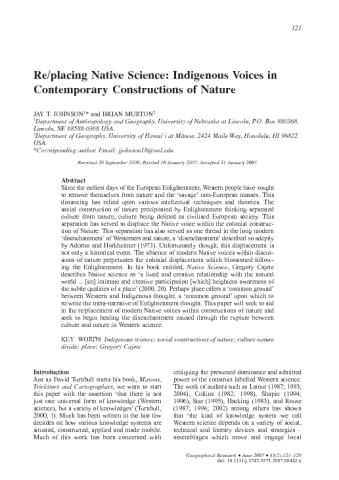 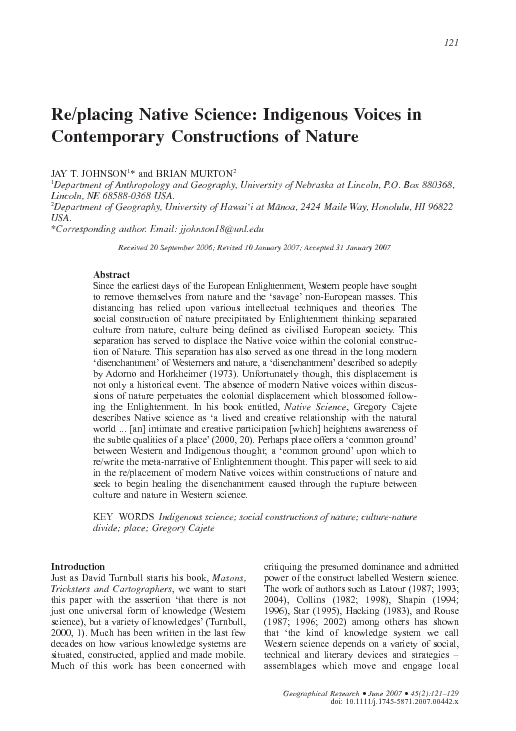 Since the earliest days of the European Enlightenment, Western people have sought to remove themselves from nature and the ‘savage’ non-European masses. This distancing has relied upon various intellectual techniques and theories. The social construction of nature precipitated by Enlightenment thinking separated culture from nature, culture being defined as civilised European society. This separation has served to displace the Native voice within the colonial construc- tion of Nature. This separation has also served as one thread in the long modern ‘disenchantment’ of Westerners and nature, a ‘disenchantment’ described so adeptly by Adorno and Horkheimer (1973). Unfortunately though, this displacement is not only a historical event. The absence of modern Native voices within discus- sions of nature perpetuates the colonial displacement which blossomed follow- ing the Enlightenment. In his book entitled, Native Science, Gregory Cajete describes Native science as ‘a lived and creative relationship with the natural world ... [an] intimate and creative participation [which] heightens awareness of the subtle qualities of a place’ (2000, 20). Perhaps place offers a ‘common ground’ between Western and Indigenous thought; a ‘common ground’ upon which to re/write the meta-narrative of Enlightenment thought. This paper will seek to aid in the re/placement of modern Native voices within constructions of nature and seek to begin healing the disenchantment caused through the rupture between culture and nature in Western science.

Provenance: Contributed to Sipnuuk Food Security Collection by Dan Sarna, PhD candidate at the Department of Environmental Science, Policy, & Management at UC Berkeley, in association with his dissertation research as well as his collaboration on Objective 12 of the AFRI Food Security grant.